Reading time: 1 minutes
Candlesticks chart the price fluctuations of a Forex pair. They can represent any period of time, from 1 minute to 1 month. Each candlestick displays four important pieces of information: the opening price, the high, the low and the close. They are easy to use and provide more information than line or bar charts. The interpretation of candlesticks is based on patterns.

it is a very strong bullish signal when it occurs after a significant downtrend. The candle has a small body and a long wick. The body can be clear or filled in. 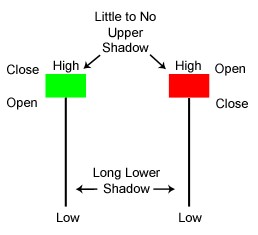 the first candle is a long bear candle followed by a long bull candle, signaling buyers are coming into the market. 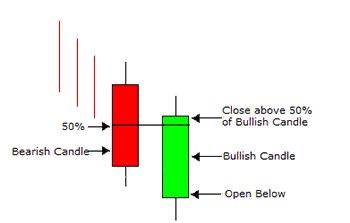 it is a strongly bullish pattern if it occurs after a significant downtrend. The first bear candle is engulfed by a large bullish candle. It may serve as a reversal pattern.

the hanging man is identified by small candle bodies and a long wick below. It might serve as a bearish signal if it occurs after a significant uptrend.

a bearish pattern, which gains mores significance if the second candle's body is below the center of the previous candle's body.

it is defined by a small bullish candle is engulfed by a large bearish candle. It is strongly bearish if it occurs after a significant uptrend.

a classic reversal pattern. It has the same opening and closing price, which makes it look like a cross or a T. The T shaped Doji is also known as a Dragonfly Doji, while an inverted T is known as a Tombstone Doji. It might also communicate indecision, when the range between the high and the low is relatively small. 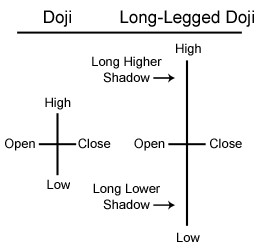 How to Manage Forex Stop-Loss and Take-Profit

What Is a Forex Trailing Stop?

What Is a Forex Carry Trade?

What Is Forex Hedging?

How to Use Moving Averages

Creative Ways To Make (at Least) An Extra $100 A Month